Analog measurement in a digital age

Measuring analog in a digital age

Designing a flowmeter for an environment with radiation

For years, the practice in measurement and control engineering is to convert analog signals as soon as possible from analog to digital information, and vice versa. In the digital domain, you do not suffer from variations due to temperature and aging. Furthermore, there is hardly any loss of accuracy in a chain of operations. Nowadays you have very good and affordable analog to digital (A/D) converters and digital to analog (D/A) converters. Also a powerful microcontroller is already available for only € 1, -. These are all advantages which also helps development of these circuits. After all, you can still make a late change in software when the hardware is already completed. Despite all of this, 3T was asked by Krohne Altometer in Dordrecht  to develop a measurement system with only analog electronics. In this article we explain why, what specific problems you may encounter were and what the result is. 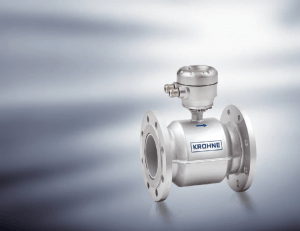 Krohne already had a converter that works analog, but with an accuracy within 2% to 5%. The requirement for the development of a new analog converter was that it had to work an accuracy of 1% or less, with the design goal of 0.5%.

An electromagnetic (EM) flow meter is based on the laws of electromagnetics of Faraday. When an electrical conductor moves in a magnetic field, there will be an electric voltage in the conductor. In a EM-Flow meter, the fluid is the ‘conductor’ which therefore must have some electrical conductivity. If the dimensions of the conductor (measuring tube) are known, then the flow can be derived from it.

Figure 2: Construction of a measuring tube

U is the resulting voltage;
k is a calibration constant;
B is the magnetic field;
D is the diameter of the measurement tube;
v is the flowrate of the fluid.

Why an analog design?

The customer of Krohne wants to apply the flowmeter in a nuclear power plant. The flow meter is mounted in a space that is not much exposed to radiation under normal conditions. However, in emergencies radiation may occur. In this case the customer wants to know for sure that the flow meter correctly indicates how much (cool) water is flowing.

A digital instrument will much quicker fail than an analog instrument. The software on a microcontroller is stored in memory using small electrical charges. These electric charges in flash memory will be preserved for decades. But due to radiation, a memory cell can be discharged easily and permanently. Then a microcontroller no longer works.

An analog design is much less affected by radiation. Radiation can affect the measurement, but when the radiation decreases everything works again. Under the influence of radiation, an analog measuring system works far more reliable than a digital measuring system. In addition, for safety reasons, there is also a preference not to use any software.

The most important requirements for this flowmeter are:

A general requirement is to the ability to set a uniform calibration factor which is valid for all types of converters. The design of the PCB is in accordance with existing IFC300 signal converter. Also, the already existing power supply for a IFC300 converter will be used again. Furthermore, the hardware must comply with ISO and RCC-E standards.

Are we now ready to measure the flow? Of course not. The voltage on the electrodes is only in the range of millivolts and has a high source resistance. In addition, the electrodes can be electrochemically affected by the voltage present. The magnetic field is regularly exchanging polarity. 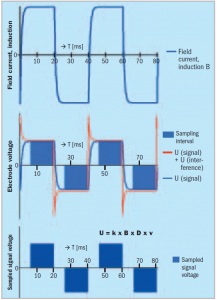 The voltage on the electrodes will then also change polarity. This is done to prevent damage to the electrodes and allows filtering the interference on the measurement signal. On the other hand, the measuring system should be able to measure in two directions and synchronously demodulate the signal.

Every converter is calibrated to a nominal flow rate. For each measuring tube (flow sensor) Krohne defines a constant that indicates how much flow actually is measured. This constant is set in the converter.

Prior to the design, 3T has defined all of the requirements with Korhne. A special part the requirements is the interpretation of different standards and regulations that are applicable to the converter and the measuring tube. The first challenge was to determine whether the measurement system is implemented correctly. Based on the design, a working model is made with only the most essential circuits. The working model was tested on a test system with water at Krohne and resulted significant improvements. 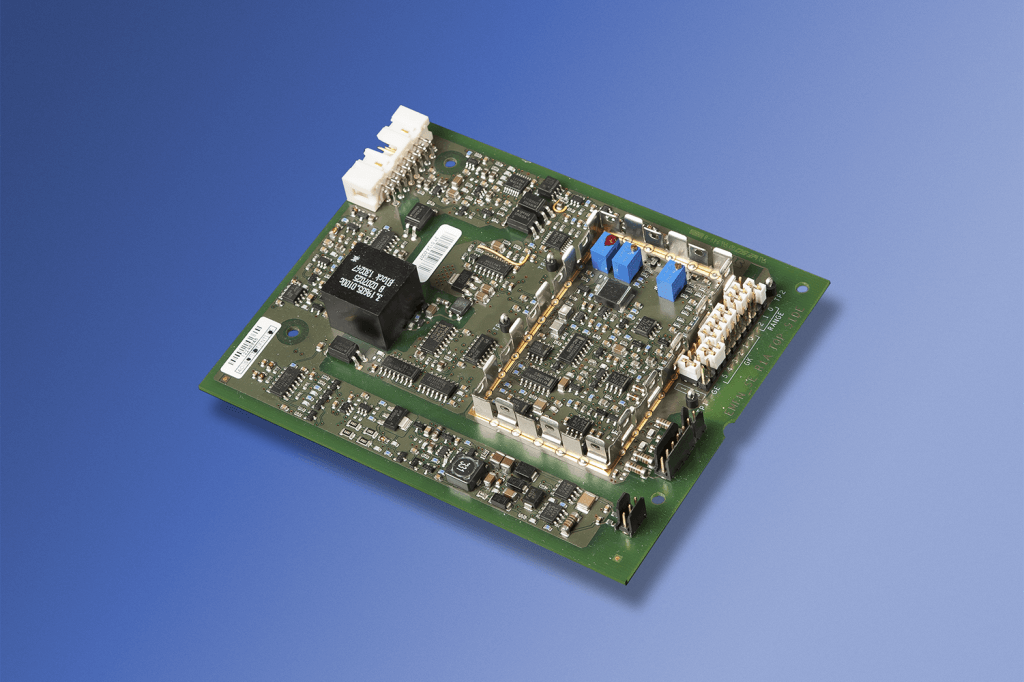 Figure 4: The analog converter AFC030. The shielding of the sensitive electronics has been removed for this picture.

During the design a lot has been simulated. This has been done with:

The EMC tests were done in accordance Ensecc 060 193, Rev. A, based on electronics with performance criteria B, where a temporary loss of function is allowed, and the system should recover itself after removal of the fault.

We agreed with Krohne to apply performance criteria A, where loss of function is not allowed. The EMC behavior resulted in one point to solve, which could resolved by the addition of a few passive filters.

The RCC-E regulation addresses the behavior of the powergrid. Furthermore, the standard sets requirements for quality assurance in production. The requirements also states that the converter should continue to work upto 0.5 seconds of the power failure. The existing power supply does not meet this requirement. Therefore, a separate board is added to the power supply for energy buffering.

After the realization of a development, six prototypes have been made of a qualification model. All protypes have been checked on correct operation and all qualifications are performed on these specimens. After some minor improvements to the production model is the final design has been made. We also took the factory testing at the manufacturer into account during the final design.

At Krohne there is a flow test rig for smaller types of sensors. An IFC300 sensor is then compared with another sensor in the same tube with water. It is a closed system, wherein the conductivity of water is roughly adjustable. With this setup 3T was able to do good testing.

The electronics are tested on thermal properties at Maser. One important test was to get a good indication at low and high temperature of the water. That is done without water, but by variating the temperature of the sensor electronics between +5 ° C to +65 ° C. The results were within the requirements of RCC-E 5. At “0% flow” the maximum deviation is 0.4%, at “50% flow”, the deviation is up to + or – 0.15% of the full scale. These are good values for an analog measuring instrument.

In subsequent tests using the measurement setup at Krohne, theAFC030 converter is compared with the IFC300 converter on the same sensor. There appears to be a deviation of about 1.5% in the measurement signal which 3T could not explain. However, it was discovered that the used sensor has a little bit of residual magnetic properties.

Due to the effect of residual magnetism, the deviation can explained. Wit the analogue AFC030,  it is seen that at the switching of the magnetic field on the sensor, it produces an larger inrush current than with the digital IFC300. Magnetic material in the sensor takes on a quantity of remanent magnetism caused by the peak of the magnetic signal. Although measuring is done from the moment that the magnetic field is stable, there still appears to be an deviation.

The digital IFC300 also shows this effect, but it is compensated by calibration. The challenge now is to make the gradient of the magnetic field identical to that of the IFC300. Only then can we continue to use the existing calibration factors.

The delivered prototype boards were tested by using a predefined flow by Krohne and approved.

The following has been tested on the AFC030:

Comparing test by customer of Krohne

In a comparative test by the customer of Krohne using the AFC030 sensor and a sensor on the same IFC300 shows that the difference in the measurement results is only 0.2%. The objective of making the behavior of the digital and analog converter equal was definitely met.