What started as a simple alarm system, developed into a multi functional communications platform for Ascom. 3T brought various functions for control and data gathering together on an embedded Linux based platform based design. After development, 3T took care of the production and delivery of thousands of pieces.

Simple nurse call systems (‘intercoms’ with alarm buttons for nursing and retirement homes) already existed in various shapes and sizes. However provider Ascom Nederland in Utrecht, was seeing an increasing demand for advanced functionality. From broadcasting of the bingo game in the nursing homes, to new services through the Internet, such as offering of meal selection and delivery, ordering a taxi. Also for home automation applications such as the control of light, temperature, ventilation and solar shading this system should be suitable.

Interesting is also the emerging field of telemedicine: the user (or their carer) can in their own environment carry out measurements for example, weight, blood pressure or blood sugar level. The measurement equipment transmits the results via Bluetooth to the nurse call system, which then sends it to the provider via the Internet. Ideally, the communication goes in two directions: the user initiates via the system menu a measurement or receive a call or reminder for this purpose.

In 2008, the Dutch subsidiary of Ascom Sweden, decided to build such an advanced nurse call system. They approached 3T to do the entire process: from design, development to production and delivery.  The product was named Amido (“family friend”, a contraction of the Latin words amicus ‘friend’ and domus ‘house’).

One of the challenges was to combine the diverse number of communication protocols and the corresponding digital and analog electronics in a print design (see picture). For the handling and logging of the nurse calls, Amido is dependent on the connected reporting back-end systems, which regulate the connection between clients and carers. This communication uses the SIP stack (Session Initiation Protocol), which is also used for example VoIP. However, there is no standard protocol for nurse call or for the exchange of telemedicine data. This made required a lot of consulting with the various vendors of reporting back-end systems.

All the communication functionality finally resulted in a complex eight-layer board design, with such a layout that different signals minimally interfere with eacho ther and that EMC interference also is minimal. The heart of the system is an ARM9-based I.MX27 processor from Freescale. Many of the components used can be found in mobile devices, and thus are miniaturized. Think of a hundred pins constituent ball grid array (BGA) with a pitch of 0.4 mm. This gave an additional challenge in the design and manufacturing (soldering), so there was a lot of coordination required with the EMS manufacturer for test and manufacturability. 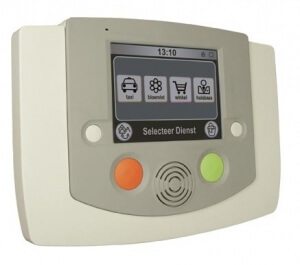 The look and feel of the user interface is easily customizable

The embedded software for the control system, we have built on top of a Linux kernel. The choice for Linux was not only because of absence of a license fee but also because the software can be easily adapted to the desired hardware platform. Furthermore, a Linux-based system can be properly configured and there are lots of applications and libraries available to build the system with and expand it. Downside is the changing version of Linux and the limited support. For the kernel, we have some frozen the baseline from time to time, so that we did not always having to keep up with all the changes of newer releases. This iterative approach turns the use of open source to a manageable process.

An important design aspect was the reliability. An alarm system should be 24/7 operational. Because reliability is not a property that you just add at the end, it became a important feature during the entire design and construction process. This can be seen in the architecture, where we have decoupled all functionality to ensure that nothing can bring the alarm feature in danger. The link with a management system developed by Ascom – which allows for remote management settings and updating the software – we have implemented in a fault-tolerant way and tested for robustness. Software updates must be done reliably, even if there are thousands of nurse call systems connected to the central system.

The PCB has a complex form factor due to the shape of the housing.

The Amido responds to a nurse call by a voice connection between the central and client, where the product acts as a speaker phone. For an optimal voice connection the real-time audio processing component uses the open-source Speex library. This library controls the acoustic echo and noise reduction. For the best results it is important that the audio streams to and from microphone and speaker are constant. To achieve this, we have optimized the existing streaming and partially re-implemented it using interrupt routines. Through clever memory usage and proper prioritization of the various processes, such as the user interface, communication and audio, we have achieved a good sound quality without hitches.

In the design of the GUI, we have kept in mind that there are different user groups: on the one hand the customers (typically care institutions), on the other end users (mostly seniors who have little experience with modern electronics and the Internet). We have setup the user interface as an website so that it is adaptable for different types of users and wholesale customers with their own style. For this we have used the open source toolkit wxWidgets, which describes the Gui in XML. Ultimately an IT or network administrator can configure the interface. For the customer the structure (more or less easy, depending on the user) and visual presentation (e.g. color blindness) were important design aspects. 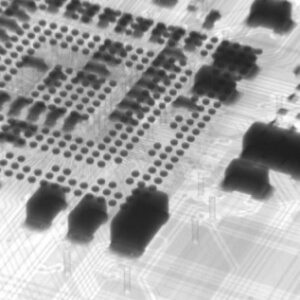 The Amido contains a lot of miniaturized components, such as a six hundred pins BGA component with a pitch of 0.4 mm.

Because of the design, cost and desired user friendly appearance, the system has a plastic housing. Again, 3T was responsible. The design, mold making and injection molding production has been coordinated by 3T. Together with Ascom we went to several homes to test different designs with potential users

To ease the installation, the Amido doesn’t have any 230 V mains, but Power over Ethernet (PoE) functionality. As a backup, there are two batteries, on which the system can run for two hours during power failure. Basically it the works on one of the batteries because any battery needs from time to time to be completely discharged and recharged. The knowledge of battery management, we have gained from the development of the electric bicycle Sparta ION and from the BMS we made for the Solar Team Twente.

With each software release, we have expanded the functionality and partially tested automatically in a standardized setup. That turned out to be tricky: one network is not the other, and a software update of 25 systems in a test environment behaves a little different than with 2,500 systems in the field. Although the integration of Amido systems with report back-end of a customers was primarily the responsibility of Ascom, we did everything necessary to help them fixes issues in order to reduce the inconvenience caused. This requires a good error reporting for issues found in the field. Therefore, we have developed a formalized procedure to align bug-tracking systems to each other and added additional diagnostic software in order to obtain the required detailed debug information.

The development, production and supply of several thousand systems we have recently successfully completed. Ascom Sweden, the product owner, has taken over the lifecycle responsibility – the production, testing (including test systems made by 3T), the maintenance and development of new functionality. This was the intention from the beginning because the parent company has its own development and production facilities.

Jeroen Koëter has worked on the project from the 3T office in Eindhoven. As embedded software architect René van der Veen was project manager at the company headquarters in Enschede.