When the weather report mentions something about the amount of solar radiation, the chance is that pyranometers of Kipp & Zonen have been used to measure it. The pyranomets also play an important role to find out the most suitable place for solar panels.  To extend the pyranometers, the most accurate of their kind, with an intelligent sensor interface, the company from Delft teamed up with 3T from Enschede. 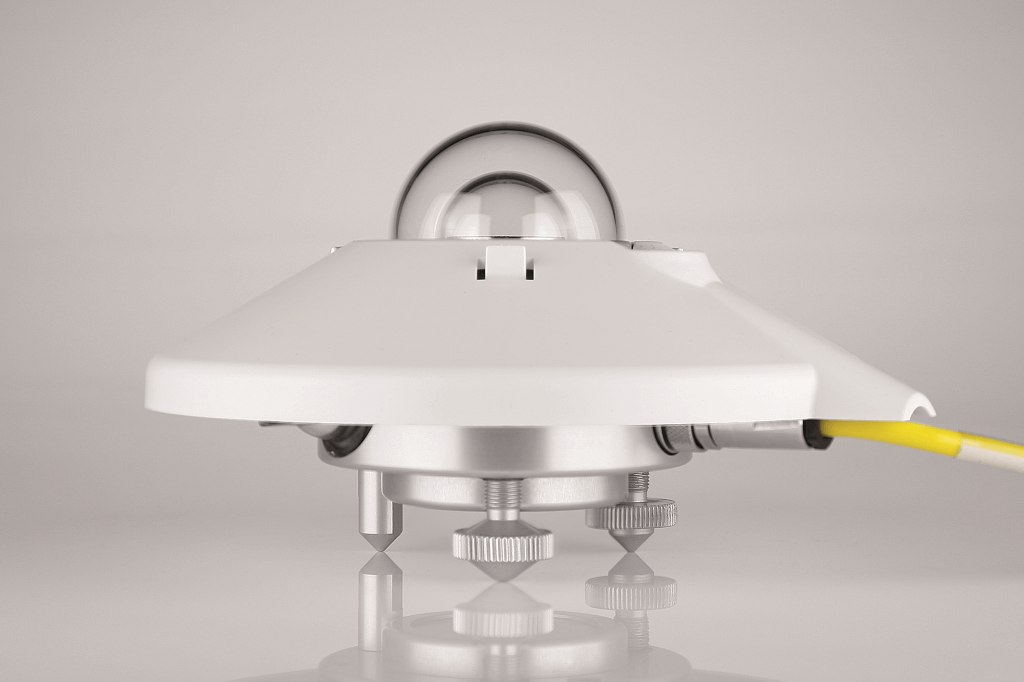 The CMP 11 Pyranometer with SSI from Kipp & Zonen

A pyranometer is used to measure amount of solar radiation and is used in meteorology but also in agriculture, horticulture and the solar market. The heart of the system is a carbon black-black sensor that absorbs radiation over a broad spectrum from two hundred to four thousand nanometers. The absorption of solar radiation results in a (small) difference in temperature within the housing, which is converted into a voltage of -5 mV to +50 mV with thermoelectric couples. The negative voltage occurs in the dark, when the black sensor by infra-red radiation, cools down more than its surroundings. Amplification and linearization then give a signal calibrated in watts per square meter. More luxurious designs also have an on-board temperature sensor in order to correct for the ambient temperature and thus to deliver an even more accurate sensor signal.

Kipp & Zonen of Delft is a marketleader in such solar radiation meters. The original pyranometer of Kipp & Zonen is an passive instrument. The instrument is accompanied by a certificate of calibration which describes the sensitivity in microvolts per W/m2, the ambient temperature correction tables and an overview of the response as a function of the solar angle. The user must convert the sensor signal himself into an accurate measure of the solar radiation.

The Smart Sensor Interface (SSI) makes it an active instrument. This module, which is mounted in the pyranometer contains the information necessary for calibration and correction, and applies it to the sensor output. By doing so, the instrument delivers directly a voltage or a current, which is a measure of the solar radiation measured in W/m2. In addition, the SSI is a digital communications interface, which passes the measured value without any loss of accuracy.

Kipp & Zonen uses a computerized system to calibrate its active pyranometer. The settings are stored in the pyranometer. In addition, it also saves them in a separate calibration database. 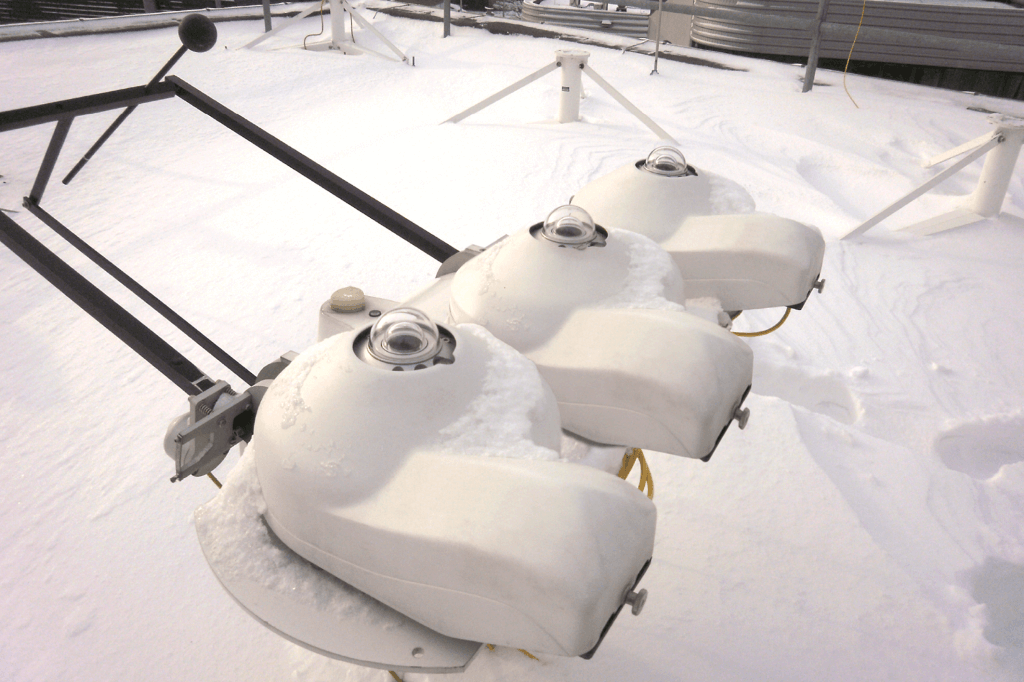 The pyranometer has to work in a lot of different environments.

Sun behind the cloud

The SSI is an idea of ​​Kipp & Zonen. For the development, the Delft company sought a partner with expertise in sensor and interface electronics. 3T was chosen. The assignment was to develop a solutions that performs all corrections and provides a digital interface, while the accuracy of the ‘ bare’ sensor remains as is.

The starting point was a functional specification of up to eighty pages (see box) . One of the requirements was a normal operating voltage of 5 to 30V, for example, using a battery of 12 or 24V, which possibly would be charged by solar cells. The analog output for the measured value must be provided either in voltage (0 to 1 V ), or in current (4 to 20 mA current loop ). In the latter case, with a connection resistance of 50 to 500 Ω. The digital interface had to offer the Modbus protocol over an RS485 signal, so that different devices could be connected to it. Also, it should be possible to connect several pyranometers that needed to be individually read out.

Kipp & Zonen had the desire to leave the housing unchanged. That meant that the electronics had to fit into the existing cylindrical space under sensor of the instrument. It should operate in a wide temperature range because the pyranometer is deployed from Antarctica to desert. The main challenge was to ensure that the SSI produces as little heat as possible. The module sits in the housing of the pyranometer underneath the sensor which operation is based on a thermal principle and thus whose accuracy is affected by heat.

Another important wish was a faster response of the pyranometer. In case of a sudden change of radiation, for example when a cloud moves in front of the sun, the sensor reaches its final value only after five to eighteen seconds, depending on the type of detector employed. The goal was a set-up time of maximum two seconds, which is more consistent with the response time of solar cells.

Finally we have developed two separate products: one with an output in voltage and one with a current loop output. With the voltage based one, we were able to calculate in advance and to ensure that the SSI would meet the requirements. We have chosen a 32-bit Cortex-M3 processor from the LPC1700 series of NXP. This one has a lot of resources on board such as Ram, flash and AD-and DA-converters, which saves in cost and space.

The SSI is composed of two flexibly connected prints of 25 to 28 mm and the analogue and the digital part are separated as much as possible in order to avoid interference.

It was also important that the Cortex-M3 has different settings for energy efficient use. We have chosen not to run it at top speed but on 12 MHz, so that the energy consumption is much lower. In a cycle of 100 ms, we handle all calculations, after which the processor goes into sleep. The entire SSI heat generation could therefore be limited to 55 mW (at 12 V supply) to 60 mW (24 V). The RS485 driver is allowed to briefly be active, which in practice is the case.

It was not easy to have a SSI with a current output, meet the requirement for maximum heat dissipation. A current loop circuit with a classic analog driver delivers much more than the maximum permitted, up to 200 mW (at 24 V supply voltage and load resistance of 500 Ω). That’s why, for this version, we first researched a current loop driver with techniques from switched mode power supplies. Accuracy, stability and heat dissipation appeared to be contradictory parameters. We were able to reach an accuracy of 0.05 percent for the voltage/current conversion, where the current loop driver developed heat level upto 28 mW (at a 12 V power) to 40 mW (at 24 V). These are maximum values which ​​in practice are acceptable to the customer.

In order to achieve the desired response time of two seconds, we have provided the SSI with a software based fast-response filter. The disadvantage of such a filter is that it adds noise to the measurement signal. However, the quality of the measurement circuit before the sensor is such that the amount of noise is negligible. 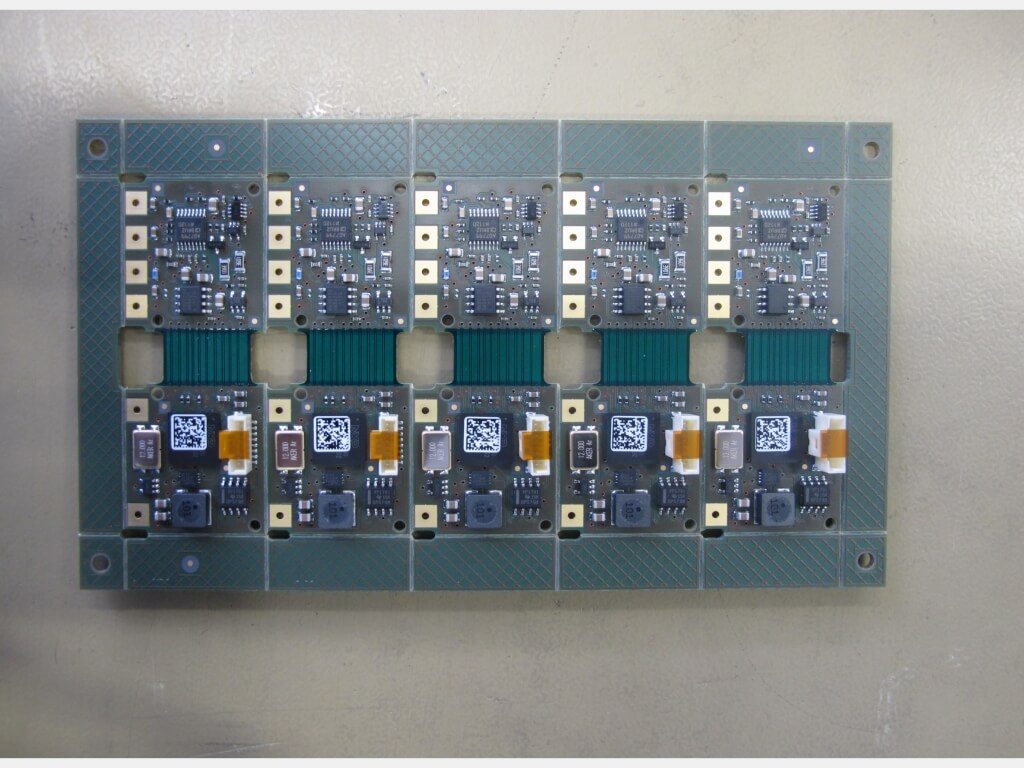 For the handling of the small flexprint in the machine assembly and testing, 3T has designed a panel which fit five SSI modules.

It was a puzzle to get the electronics fit into the limited space. It was not possible to achieve this with a design of only one print. We would be to place the components very close to the edge and analog and digital part would be too close together.  Therefore, we have chosen for two flexible connected prints of 25 by 28 mm, with the analog and digital part separated as much as possible to avoid interference. The resulting flexprint is a reliable solution that has limited additional costs in comparison with a normal print.

In the field, the system is exposed to various weather conditions . Especially lightning requires a thorough protection of the electronics. We can’t guarantee that the circuit will survive an ligthing strike, but we have taken into account in the design. In combination with well shielded external wiring the design passed the EMC tests well.

The software we have written in C. The new control software loads using a bootloader in the instrument. After each build during development, we have tested the software using unit tests based on the  Google C++ testing framework. In this way we managed to make reliable code with minimal functional requalification. The working of the entire SSI has been checked with our own test application, written in the LabVIEW environment from National Instruments. This application uses the digital interface to show that all the functional properties meet the specifications.

3T has produced and qualified the prototypes according to functional and technical specifications. We also do the series production for Kipp & Zonen. 3T has specialized lab environments in Enschede where we can work ESD-safe with electronics.

For the handling of small flexprint in machine assembly and testing, we have designed a panel in which ( ‘ unfolded ‘ flex prints ) five SSI modules fit. In addition, we have developed a test machine with contact pins that connect on the bottom to test connections on each module . This machine uses programmable power supplies and data acquisition modules, under the control of NI ‘s TestStand software.

In the meanwhile, Kipp & Zonen  also use the SSI in SHP1 pyrheliometer . This instrument records only the amount of direct solar radiation where a pyranometer also measures the diffuse radiation.