The rise of the electric car and the e-bike gives the development of battery packs a boost, aiming for lower costs and larger volumes. Efficiency and safety of the battery must be ensured by the battery management system (BMS). New BMS solutions are preferably tested under challenging and extreme conditions. A good example is the World Solar Challenge race across Australia where solar cars are powered from a battery pack which are charged by the sun. The Solar Team Twente and electronics company 3T developed a Battery Management System that is extremely precise, guards the safety, and accurately determines the battery capacity. The ‘scrutinizers’ were very enthusiastic ‘Down Under’.

Bert van den Berg is a project manager at 3T in Enschede. Koen Bosman (Electrical Engineering student at the Saxion Enschede) and Tom Vocke (student of Electrical Engineering at the University of Twente) of the  Solar Team Twente in 2011 were responsible for the electronics. Hans van Eerden is a freelance textwriter in Winterswijk.

The World Solar Challenge is held every two years across the Australian outback from north (Darwin) to south (Adelaide) and since 2001 and since 2005 , teams of students from Delft (TU) and Twente (UT and Saxion) participate. The Dutch score well in the international field and impress with their innovative designs of solar cars. The Delft car excelled through its low weight while the Twente car presented innovations for optimum light absorption, such as a tilted solar panel and a structure with Fresnel lenses. In October 2011, Nuna6, the Delft solar car, ended the 3,000 km race as second and Twente 21Connect as fifth. The Twente car had the fastest qualifying time and thus was allowed to start first. A motor controller that blew up directly after the start ( a standard component used by almost all teams) however caused to much delays. Not because of the few minutes need to change the part, but due to time -consuming overtaking of all teams in the busy traffic on public roads. As a result, Twente ended up into a bad weather front. The top three just stayed ahead and proved impossible to catch up.

Cooperation between STT and 3T

The 21Connect is the fourth generation car of the Solar Team Twente (STT). A large number of research institutions and companies sponsor the team every time. Most companies do that in the form of materials, 3T mainly provides knowledge and expertise. From the beginning, 3T is the stable source of knowledge in the field of electronics for the team, where the team is made completely new every two years. In 2006-2007, the development of the Battery Management System (BMS) completely took place at 3T and performed reviews of the other electronics made for the car. For the 2011 car, the solar team took the lead and 3T did mainly the reviews of the design changes of the PCB and firmware. If necessary, the team was able to order components via 3T.

After the car was built and tested in the Netherlands (including in a wind tunnel), it moved to Australia for final testing and mandatory inspection by the race organization. Regarding electrical safety and performance of the battery pack, the so-called ‘scrutinizers’ were enthusiastic about the Twente car. “The first team to do it right”. That confirmed to the team that their choice to keep the car as simple and reliable as possible, was the right one. A battery pack with an integrated ‘start-up’ circuit was chosen instead of two packs and a separate start-up box, as was done previously. The old system required three relays in order to switch on and off safely, while now only one was needed. Furthermore, the connections for the switching of the Li-ion battery cells in series were made ​​by spot welding, not by soldering, because the latter injects more heat, and therefore makes the connections less reliable.

The battery pack drives a three-phase electric motor which is inserted in the front wheel. This construction makes a transmission redundant and reduces efficiency losses, making the maximum efficiency of the engine of the 21Connect as much as 98%. The electrical system on board was also efficient, which includes, next to the control unit, also the collection of data (automotive and environmental parameters). Compared to the last time it was necessary that the used power was reduced more than half, from 35 to 16 W, a saving of about 2% of the average total power consumption of the car. This was achieved by a smart electrical design, including the reduction of the number of relays and the relocation of the computer for data processing to car that follows the solar car.

The solar car race is not about top speed, but about strategy. The BMS plays a crucial role. At top speed, the car consumes much more ( 2.5 kW of power at 135 km/h) than the 6m2 Si solar cells can produce (max 1.3 kW, 0.9 kW on average). This time, most teams used, based on new rules, the same Si cells, because when using the more expensive GaAs cells with higher energy yield, one could only use 3m2. At the start of the race, the batteries are completely full and at the end they should be drained as much as possible, but that should not happen prematurely, because starting up from an empty battery takes a long time.

The starting point for the strategy is the car model, that describes the behavior depending on energy intake and the circumstances. Besides the BMS, input  is also taken from the weather forecast (particularly on cloud and wind conditions; this time weather scientist Helga van Leur was member of the Twente race team), from a height map of the route ( for example, to prevent shutdown to occur on a slope), and out information about other obstacles (cattle grids, urban centers, etc) . The aim is to find the optimal cruising speed, and use a constant driving speed because acceleration and deceleration costs (additional) energy. This time the challenge was greater than in previous years, because the weather was anything but constant and fires caused delays and ‘ Eclipses’.

The main function of the BMS is to monitor safety. The huge battery pack contains a lot of energy and that can result in a lot of danger in the event of malfunction. If the battery is charged too far, overheating may occur and thus the risk of fire. The same applies to emptying too far; this may result in charging in the wrong direction of empty cells, with potential fire hazard as a result. This happened to two teams in the race, most likely due to the lack of a BMS. In 2005, the first solar Twente used a standard BMS. However, that did not have the desired accuracy for determining battery capacity and thus did not meet the combined requirements of safety and efficiency. If the capacity is not accurately known, too large safety margins have to be maintained, and that does limit the available capacity.

To achieve a higher capacity at a lower weight (i.e. a higher energy density), the 21Connect car changed to Li-ion batteries, which are more critical in terms of safety than the previously used Li-polymer batteries. The battery pack had 38 cells, with a total of more than 5.1 kWh capacity. The hardware shuts off at a voltage of 4,230V, because above the maximum voltage of 4,235 V per cell there is threat of  fire. Therefore, in the BMS software the upper limit of 4,21 V was used. The maximum voltage of the pack was thus about 160V, which was well above the safe limit for people of 50V; thus caution when handling was required.

In use, the BMS must be able to indicate how much energy is available. That capacity determination is done indirectly, by measuring the battery current. By integrating the power and the delivered load, the remaining charge in the battery can be determined and thus the remaining energy capacity. The typical discharge curve for a battery is used for that, which can be determined in advance and represent the relationship between the load and battery voltage. At 3T we studied characterization of a battery. When discharging, the battery must at the various points properly relax, before a voltage (OCV, Open Circuit Voltage) can be measured which is a reliably measure for the state-of-charge of the battery. 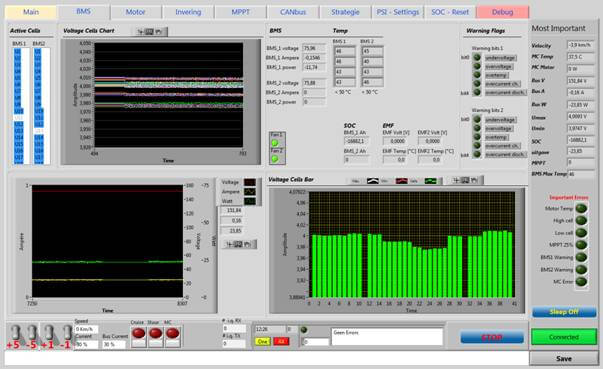 Screenshots of BMS-interface, which shows per cel the indication of the actual voltage (bottom-right) and transition in time (upper-left).

The problem lies in the integration step. All (systematic) errors and noise in the measurement of the current are translated by integrating, into a deviation that may increase significantly over time, especially if alternating net discharge and charging ( especially outside race times ) occurs. Capacity determination is then not reliable and therefore a standard BMS contains a thermal fuse as the ultimate security measure. For a solar racer such a fuse is undesirable because of the risk that it – perhaps wrongly – blows and stops  the car for a long time. The safety system must therefore come from software and hardware, which is obviously coupled to the relay in the start-up box.

The current meter that was connected to the BMS, was build up out of components which exhibit little drift, and have a low temperature sensitivity. The current measurement was accurately calibrated. The same approach was needed to assure that the battery voltage up to 160 V, could be measured with a few mV accuracy.

Energy was also put into the development of a battery balancing system. A battery pack works best when all cells have the same capacity. In a series connection, the cell with the lowest capacity determines the performance. Balancing means that all the cells are brought to the same capacity by discharging them to the same voltage level. Previously, this was done manually in a lengthy procedure. During the last year, STT and 3T together developed an automatic balancing system.

The investments in the BMS paid off. This became clear when a competitive team overtook 21Connect, but five kilometers later was passed again, when they had a smoking battery standing on the roadside. At the finish in Adelaide, the Twente battery had 100 Wh (2% of the maximum capacity) left. Not many teams dared to take their car to the limit in terms of their battery capacity, as they feared that their car would stop in sight of the finish line, which has happened in previous years. The precise capacity determination by the BMS Twente could take them to the limit. 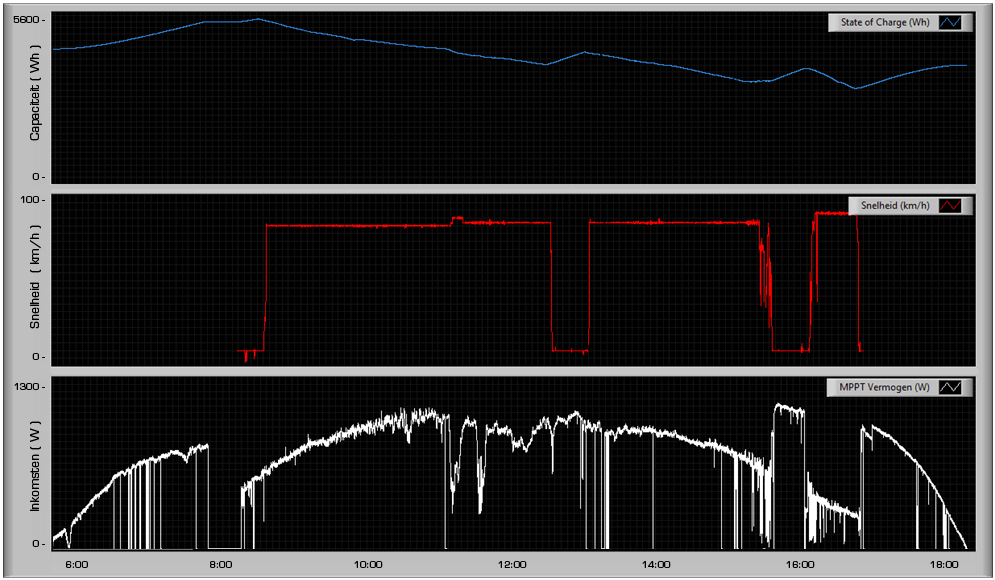 Drift of the capacity of the battery pack during the race set of to the speed of the solar car. While driving, the capacity steadily reduces. Net charging takes place in the early morning and the afternoon, outside the race times from eight to five, and during a stop during the race .

The contribution of 3T to the development of the BMS has over the years, had close similarities with the work done for Sparta. For this manufacturer of electric bicycles, 3T has been developing the electronics for control, including the BMS for NiMH batteries. Experience gained by 3T with the Solar Team BMS ( Li – Polymer and Li- ion batteries), is used for the new Li-ion system of Sparta . Thus, the knowledge and experience with accurate determination of the capacity of the solar battery, can be found in the BMS for the new Sparta ION ® .  It is true that electric bikes are less critical applications, because it does not use the extremes (too full or completely empty) conditions, but safety surveillance is still essential. The battery for the ION, consisting of seven or ten cells, contains for each cell a BMS board that accurate monitors voltage and temperature.