At this moment, the Bridgestone World Solar Challenge 2017 takes place in Australia. The Solar Team Twente (3T is Middle-Red sponsor of the team) also takes place in the race. In the past, we have worked with the team on their Battery Management System (BMS). This year, we have helped the Red Shift with two things: the next generation of MCU (Motor Control Unit) and a datalogger for measuring the mechanics of the car.

Jan Lenssen (Electrical Engineering) of the Solar Team Twente has spent several months at 3T to work together with our engineers on developing a new MCU based on Gallium Nitride technology that 3T has used in PEPPER. It is too early to use this MCU in the 2017 car, but it will for sure be used in the next generations of the car of Solar Team Twente. More information can be found on:  http://www.solarteam.nl/high-tech-in-the-outback-nieuwe-motor-controller-unit-mcu/ 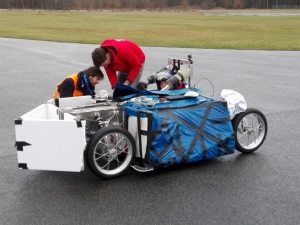 At the end of last year, Aart Stuurman (Data Acquisition) and Rémon Kalter (Mechanical Engineering) came to 3T with the question if we could help them with logging sensors to measure the mechanics of the car. After a quick rapid prototype, a 16-channel datalogger was created consisting of an Arduino Due platform with two 8-channel ADC evaluation boards, which was tailored to the needs of the Solar Team Twente.

The specific needs where: synchronisation with the X-sens accelerometer platform, 16 channel simultaneous sampling at 2kHz for strain gauges, easy to use and fitted for mobile measuring.

Aart Stuurman tells more about the datalogger in his blog: http://www.solarteam.nl/week-data-acquisist-aart-stuurman/